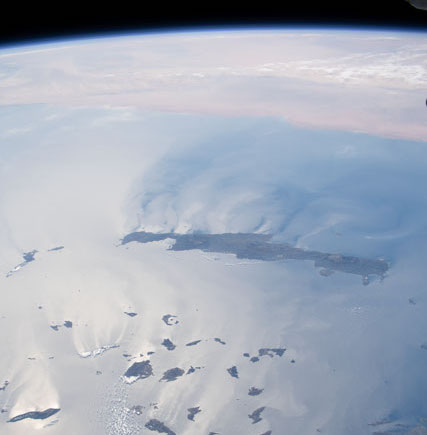 The weather conditions on the Skinakas peak are very favorable for astronomical observations. This is due to the fact that its altitude is fairly high (1750m) and that it is located on the north side of the island of Crete, just 22km from the coast. As it can be seen in the satellite photo to the right, showing the island of Crete and Africa in yellow at the top of the photo, since the winds are typically from the north and the closest land mass to the north is the island of Santorini, some 140km away, the flow of air reaching the Skinakas peak is laminar. Only when there are strong winds from the south (top of the photo to the right), sometimes including dust from the Sahara desert, there is turbulence.

More specifically, using a two-aperture Differential Image Motion Monitor (DIMM), which is a device measuring the astronomical seeing, it was shown that the Skinakas Summit is indeed an excellent site, probably among the best in Europe. The observations took place over 43 consecutive  nights during the months of May and June and reveal a median astronomical seeing of 0.7 arcsec.

The night sky BVR brightness at Skinakas (based on observations conducted in August 2008) and revealed that Skinakas Observatory is a overall dark site, with the exception of the direction towards the city of Heraklion (North East). The night sky surface brightness towards zenith was found to be Bz = 22.55, Vz = 21.74, Rz = 21.18 mag/arcsec2. When a zenith correction was applied to the sky magnitudes, the mean values of the night sky surface brightness (over all sky pointings used) were <B>=22.36 ± 0.16, <V> =21.60 ± 0.14, <R>=21.07 ± 0.14 mag/arcsec2. For further details on the topic, see here. The night sky spectrum at Skinakas, along with an estimate of the contribution of the light pollution lines to the sky brightness can be found here.

The observatory is open 6 to 7 months each year, between May and November. Based on the analysis of weather data of the 1.3m telescope and the logs of the observers for a period 9 years (2014 to 2022), the observatory operated for 1576 nights, with 688 nights lost due to bad weather. A few histograms are presented below:

More information on the current weather conditions at Skinakas provided by MeteoBlue are shown below.