RoboPol is a specialized photopolarimeter designed specifically for the 1.3m telescope at Skinakas and commissioned in the spring of 2013. It was conceived, designed, and developed by the RoboPol Collaboration, which is comprised of the University of Crete and the Foundation for Research and Technology – Hellas in Greece, the California Institute of Technology in the United States, the Max-Planck Institute for Radioastronomy in Bonn, Germany, the Nicolaus Copernicus University in Poland, and the Inter-University Centre for Astronomy and Astrophysics (IUCAA), in Pune, India.

RoboPol was originally used to study the polarization of visible radiation from >100 blazars with intense gamma rays, which allows the testing of structure and radiation patterns by jets emanating from super-massive black holes. Subsequently, RoboPol has been extensively used for other research problems, including mapping the magnetic fields of molecular clouds in our Galaxy.

RoboPol was designed with high observing efficiency and automated operation as prime goals. It uses no moving parts other than the filter wheel. Instead, a combination of halfwave plates and Wollaston prisms are used to separate photons with orthogonal linear polarizations retard them, and simultaneously produce four images on the CCD detector for each source in the focal plane. The photon counts in each “spot” are used to calculate the Stokes parameters of linear polarization. This novel, 4-channel design eliminates the need for multiple exposures with different halfwave plate positions, thus avoiding unmeasurable, dominant systematic errors due to sky changes between measurements.  A mask in the telescope focal plane prevents unwanted photons from the nearby sky and sources from overlapping with the central target on the CCD, further increasing the sensitivity of the instrument. Its large, 13’x13’ field of view allows relative photometry using standard catalogs (USNO, PTF, etc.), and the polarimetric mapping of large regions in the sky.

More information including the science results obtained with the instrument is available in the web site of RoboPol. 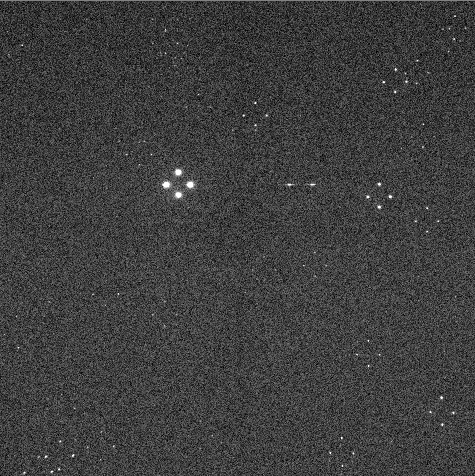